A Hair System is a Better Solution! 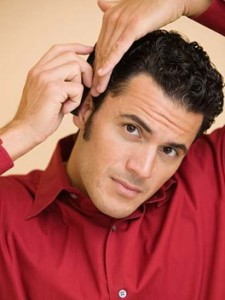 We talked a bit last time about intervening when a friend or relative has a horrible comb over. We thought it might be a good idea to talk a little more about that particular topic. After all, once the comb over has been eliminated, a good hair system is in order! Here are a few more of our thoughts about the dreaded comb overs.

Do people who sport comb overs actually think they look good?
As far as we can tell, they must think they work for one reason or another. But do they really think they’re fooling everyone? We’re not exactly sure. But these poor souls continue to do it. We think that perhaps the comb over started out innocently enough—it was just a short little thing to cover up a small bald spot. But then the comb over became part of the wearer’s ritual and comfort zone.

How do they pick out the “chosen hair” for the comb over, anyway?
It takes quite a long time for hair to triple or quadruple in length so that it’s long enough to cover a bald spot like that. Setting yourself up for a comb over is no easy task! Looking at them, really, they seem quite planned out.

So how does it get to be so bad?
Who are we kidding? Comb overs don’t just HAPPEN. There’s a design behind them, and whoever is sporting a comb over put a lot of work into the darn thing.

It’s time to tell comb over enthusiasts that there’s a better way! Choose a quality hair system from Advent Hair instead.